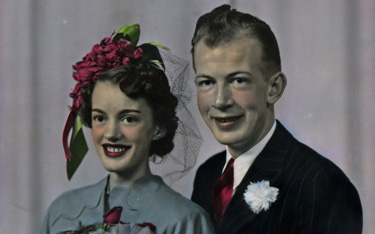 March is not the best month for me emotionally and family-wise.

March 2nd was the 3rd anniversary of my Dad’s passing.  March 11th marks 20 years since my Mom died from cancer.  Then March 23rd would have been Mom’s 90th birthday – she passed just shy of 70.

It is a difficult month not so much because I miss them, but because it is the one month where my feelings towards my parents are not so clear.  Yes, in some ways I do miss them and in other ways I don’t.  In the last three years I have been finding out things about myself that I never did when they were alive.

Having Dad live with us for the last four years of his life was interesting to say the least.  There were times when we really bonded – watching hockey, soccer, the 2010 Olympics, curling, Wheel of Fortune, Jeopardy, well you get the idea.  But it wasn’t all about TV – we bonded over (his) music which I grew up to love and stories about the family and his life after the war.  I realized that this was all we ever had in common and it was all his stuff.  Well I still like the Olympics and Jeopardy, etc. but if all of those things were taken away, we would have honestly not have had anything to talk about.

I have talked about Dad before, but haven’t said much about my Mom, and after all it is her birthday.

My Mom was a lovely lady.  She was a talented artist and gave me my love of crafts, jigsaw puzzles, sewing and the biggest ones – cooking and baking.  I used to love sitting in the kitchen watching her doing her Christmas baking or just making dinner for us.  It wasn’t long before I was helping out as much as I could and by the time I was 12 I was able to make a lot of things on my own.

This was good because my Mom was ill a lot of the time and when my Dad bought the Pharmacy he was working in, my Mom went to run the front shop.  So, I was alone and able to make myself macaroni and cheese (from scratch), or other simple meals. As I got older and better at cooking, I was making meals for them too. I also became good at grocery shopping and as soon as I was 16 and got my driver’s licence I was doing that on my own as well.

There was one thing about my relationship with my Mom that was uncomfortable.  She considered me her “best friend”.  I had lots of friends and what I really needed was a Mom.  As I got into my teens this was what started to pull us apart.  She loved my friends from school, a couple of which were often invited to dinner if they were around at that time.  She treated them more like daughters than she did me.

But when I started to date (which wasn’t until university), she would dislike my (2) boyfriends that she never met.  I went to school in a different province!  This dislike then started to swallow up any friend, male or female that I had, either there or once I came back home.  This had me doubting myself and then the friendship would go sour.  And my Mom would be happy because then I would rely on her.  This went on until she died.

But I did love her…and my Dad.  Even though they were embarrassed by my mental illness and critical of my friends and lifestyle, I loved them.  After all, they were my parents.

One Reply to “Happy Birthday Mom”