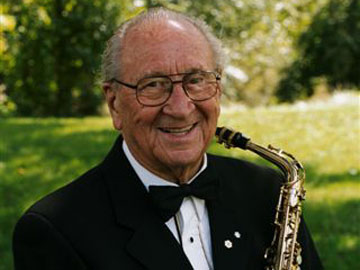 A good friend posted a news link on her Facebook page that lifted my heart and deflated it at the same time. Dal Richards, a local and national phenomenon in music circles, died on New Year’s Eve.

My heart sank because this man played a significant role in my relationship with my father, specially in the last years when Dad lived with us. Also, anyone who knows about big band music will have at the least heard his name.

What made me smile is that he passed away in his wife’s arms very close to midnight last night. You see, Dal Richards has played on New Year’s Eve for the last 79 years (this would have been 80 but he was too ill)…he passed away at 97 and was still going strong until recently.

When my Dad moved in with Hubby and I, he would listen to Dal’s radio show every Sunday night from 9 – 11 pm. It had been his habit for years and I was happy to share it with him as hubby would either be sleeping for an early shift or working a late one. I inherited my love for music from my Dad, which included big band and old standards. Dal’s show included old recordings (some never heard before) of songs, interviews and live moments caught on tape. Dal’s guests and his own stories transported you back in time in an almost magical way.

One time, before he moved here, Dad wrote a letter to Dal Richards about the time after WWII that Dad and a friend went down to New York after they were discharged. They were allowed to wear their Canadian uniforms and, as such, got a lot of freebies. This included getting into the clubs, Radio City Music Hall, movies and more. They stayed with the friend’s aunt and spent about 5 days there. He first got a written reply from Mr. Richard’s wife, Muriel. However, a few days later Dal, himself, phoned my Dad and they talked for quite awhile. Dad recalled how he saw Doris Day, Tommy Dorsey and many more. Dal was very impressed!

Remembrance Day (November 11) of the next year my sister, Hubby and I took Dad to see Dal and his band play. We all thoroughly enjoyed it. We bought him the CD and Dad had a chance to get Dal’s autograph. We took a picture; however, I can’t find it at the moment. Dad mentioned their talk though Dal was a little preoccupied and didn’t remember. After all, it had been a year, he talked to lots of people…and he had just done a full concert at almost 90 years old!

Then Dad came to live with us as his health diminished. He used to say “How does Dal do it when I am younger than he is”. I thought my Dad did pretty good considering his health!

Anyway, Dal put out another CD and I ordered one through the website. I wrote a little about my Dad and mailed a cheque to cover the CD and mailing costs. Our phone  rang a week or so later and a man’s voice asked for me. He then said he was Dal Richards and had gotten my email. He wanted to thank me and asked what the inscription should say. I told him I didn’t want to let Dad know he phoned because the CD was supposed to be a surprise. He thought that was wonderful and hoped that my Dad would be feeling better soon.

When he felt up to it, Dad would go outside and get the mail. This one day it was nice out and he said he would go. His eyesight was very bad and he would usually get me to check who it was all for. However, he stared at this large envelope and said “Is this for me? I don’t remember ordering anything”. I pretended to check and said “yes, it is for you”. I opened it for him and he pulled out a CD and a letter, which I read. It said that Dad had a daughter who loved him very much (as I blush then AND now) and was happy to answer my request. There was more about music and well wishes. My father had tears running down his face and I was finally able to tell him about my phone conversation. It was a good moment between us.

Oh, and Dal Richards never cashed the cheque I sent for that CD.

So Mr. Richards, I can just imagine the conversations you and Dad will have in heaven, and the wonderful music that will be rocking the clouds when you jam with all the other greats who have gone before you. You will be greatly missed – by our country, our province and by this daughter who feels privileged to have “known” you.