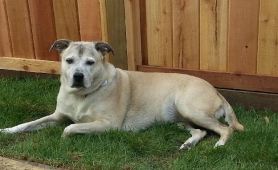 If you have followed my blog for any length of time, you will have met my awesome fur-girls, Violet the Wonder Dog and Monkey the Brat Cat. Since my health challenges often keep me at home, they are my constant companions, nap-buddies, and pains in the neck!

Long before Monkey took over the house, we had Violet and a stubborn yet lovable mutt named Joie. Though total opposites, they were best of friends. When my Dad came to live with us, the two dogs would spend a lot of time in his room, which he loved because he missed his dog whom he lost a couple of years before. Dad passed away in 2012, and the dogs were very lost for a long time. Just short of a year later, we lost Joie to a very aggressive lung cancer. Violet was lonely, and it broke our hearts.

Violet is a real creature of habit, especially if that habit involves food. I was at the pet store and trying to find some toys to cheer her up. They had just got some new treat dispensers. One was a round plastic box with puzzle shapes that open in different directions on the top. You put a treat in each of the four slots and close them over. I knew this would be something she would love. Sure enough, I brought it home, filled it, and you didn’t even have to show her how it works, she had those treats out in nothing flat.

Emma, a fun 10-year old who used to live next door, would come over often to play with Violet and each day would fill up the puzzle. This became their thing, and I don’t know who enjoyed it more! Since Emma moved away, the puzzle became more of a base for the water dish than anything else. If I thought about it at all, I guess I would have thought Violet had forgotten about it as I had.

Today I noticed the water dish was almost empty, so I picked it up to wipe it out and refill it. I was distracted and went down the hall before putting the dish back. I heard this racket coming from the kitchen/dining area and went fast as I could to see what it was. Here was Miss Violet frantically opening each of the sections of the puzzle looking for the nonexistent treats. She looked at me with the saddest eyes as if the world was going to end.

I need to add here that as of last week’s vet appointment, Violet is on a diet. She has put on the pounds, and it is not healthy for her arthritis (two things we have in common, weight and arthritis – we even take some of the same medications). But my “Girly” was so cute and pitiful that I couldn’t resist, and I filled the toy up with four little “healthy” treats. She went to work again, this time having a bit more success. When she finished, I quickly put it back under the water dish. I don’t want her getting any ideas that she can dump the water to get treats!

Oh, and Monkey didn’t miss a trick. She was looking all around for her treats, which of course I had to hand over for no reason at all other than her “big canine sister” was getting something, so she needed to as well.

I sure do love my fur-kids!

13 Replies to “A Violet Never Forgets”