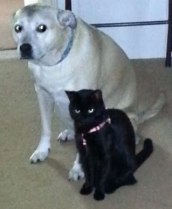 I was out with Kay this afternoon. She graciously offered to come shopping with me to pick up food for the fur-kids. It is a major undertaking involving two stops and a lot of money!

The first stop was the vet’s office to pick up Violet’s dry food and treats. We have to get it there because she has very sensitive allergies, needs nutrients for her joints and now is on a weight-loss plan. So, one 8 kg bag, two types of grain-free, beef-free treats and $130 later, Kay hauls the stuff to the van. Thank goodness I don’t have to get Monkey’s food there! And it didn’t even include any of Vi’s medicine!

Next, the pet store. Violet loves to go there, but we didn’t take her today – too hot out and she has been in a lot of pain. We picked up eight small cans of cat food for Monkey, six cans of wet for Violet (to hide her pills in), three frozen shank bones, Temptations for Monkey, and a container of wheat grass. I hate the Temptations snacks, but they are the only ones that Monkey will eat. I prefer more natural food items; however when Violet gets her treats for taking her medicine, Monkey has to get something as well. At least I only had to pay $50.00 here!

So, $180 later I have enough supplies to last about six weeks. Next will be the prescriptions which are a lot more.

I have come to the conclusion that as much as we love these two, they need to start earning their keep, LOL!! But what can they do?

Well, Monkey is a black cat which speaks of greatness right there. She is also an excellent mouser. She can climb like her namesake, run like her wild cousins, and “jump and stick” like an Olympic track star! Maybe we could get her on “American Ninja Warrior, Pet Edition”. I can see her aceing the warped wall, but she may have difficulty on the salmon ladder!

Violet is a great mouser as well! We took her to a camp we were cooking at that had been through a forest fire a year before and all the mice were scrambling around. Violet wasn’t allowed off leash at first but when the camp custodian saw her kill a few she was his new best friend! Violet also does impressions. In the picture above she is doing her Eeyore with the sad look and limp tail. She does others as well!

In all seriousness, I love these two furry goofs and don’t regret a single penny we put out for them.