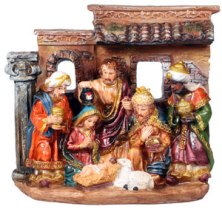 Mary, did you know
that your Baby Boy would one day walk on water?

Wow, I have gotten through my first week in this challenge and the only day I really missed was the first one because I hadn’t seen the challenge until almost the end of Day 2!

Mary, did you know
that your Baby Boy would save our sons and daughters?

There is a Christmas song that really speaks to my heart this time of year. It is “Mary Did You Know?”, written by Mark Lowry and Buddy Greene and sung by way too many people to even think of, let alone list”. My favorite version was by Kathy Mattea, though the Pentatonix and Jordan Smith are definitely contenders.

Did you know
that your Baby Boy has come to make you new?
This Child that you delivered will soon deliver you.

Several years ago I was helping out with our church Christmas banquet and came across a beautiful soliloquy of Mary speaking to a just born Jesus. It needed some updating, and the perfect actress for the part. The young woman who agreed to take it on was probably the same age that Mary was when she gave birth. It was a lot of work to memorize all of the lines and to identify with what this new mother was going through. But she did an incredible job. She even was serious enough about it to make some of her own changes in the script – making it more believable.

Mary, did you know
that your Baby Boy will give sight to a blind man?

I took the song And spliced it before and after the play, having “Mary” giving attention to her child as the music played. We even had a backdrop of a creche on a screen. The experience of being part of this was very moving. I think I learned more about what must really have been like that from reading the scriptures or watching countless movies on the subject.

Mary, did you know
that your baby boy will calm the storm with His hand?

I remember hearing two women at the banquet referring to the doll we used for the baby – there wasn’t anything suitable in the church and I had forgotten about it until the last minute. I found a doll at the local dollar store and we wrapped it up in white cloth. The ladies were mentioning that the “baby” had long eyelashes and didn’t look at all “like a savior”. It hurt at the time; however, I knew that this was not what was important. If not one single person had liked the performance (and everyone did) the important thing was the fact that Mary was just a young girl who was given an incredible gift and responsibility.

Did you know
that your Baby Boy has walked where angels trod?
When you kiss your little Baby you kiss the face of God?

Did she know how important her child was to the world? Could she really fathom that this was God’s son?

The blind will see.
The deaf will hear.
The dead will live again.
The lame will leap.
The dumb will speak
The praises of The Lamb.

Did she know that 2,000+ years later people would still be talking about and celebrating the birth of her son? I am sure the fact that she gave birth to him in a barn with animals, shepherds, and kings was not something she wanted to remember. While there were no hospitals back then, there were still better conditions for normal babies, let alone “the Son of God”.

Mary, did you know
that your Baby Boy is Lord of all creation?

But I am sure she knew that her baby boy was special. After all, the angel Gabriel had told her so. Most first time mothers (and ones that are older than 15 or 16) are nervous and even afraid of all that comes with having a child. She and Joseph were far from home, in an uncomfortable situation over the pregnancy happening before they were married and I am sure tired and hungry from their journey. All of a sudden they are parents.

Mary, did you know
that your Baby Boy would one day rule the nations?

We know very little about Jesus’ growing up, except for hiding out in the Temple while his parents left. Was this an indication that he was hard to handle? I kind of doubt that. Did HE know what his destiny was, and if he did, who told him? His Mother? His Dad? His FATHER? the angel?

Did you know
that your Baby Boy is heaven’s perfect Lamb?
The sleeping Child you’re holding is the Great, I Am.