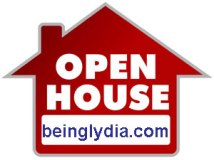 Note: This is one of my long winding stories that you have come to know and love (I hope) here at Being Lydia; however, at the very bottom you are invited to add your link for an open house/meet and greet! Please join in the fun and meet some new friends!

The week between Christmas and New Years is different for everyone. Some people work, some play with Christmas presents, others are away on adventures. Growing up, my parents would have what they called an “Open House”.

An Open House at our place meant invitations (all hand made by my mother and me) would be sent out in the mail a few weeks before Christmas. Some guests would be invited over the phone or when they stopped by the family store. They would be invited to drop by our house at any time between say 2:00 and 5:00 in the afternoon.

There would be lots of food to prepare

It was the preparing for these events that I loved. I would help my Mom out from an early age in the kitchen and even getting the house ready. Once the people arrived though I would say hi and then would often retreat.

When I got older and was on my own, I continued the tradition the best I could. I had a couple when I lived in a co-op complex. They were not as big and fancy as when I was growing up, but I was proud of them just the same.

During my first marriage, we had two such parties. Or, should I say we planned two. One was a great success, the other not so much. It was one winter when the wet coast was actually very white.

My then mother-in-law came down from the interior by bus and stayed over Christmas. The day she was to go back, the snow came down fast and furious. If it was bad here, it meant the roads back to her home would be even worse. We phoned the bus station and they said the buses were leaving but were just a little behind. She had her ticket so we decided to go and see. By the time we got to the station all buses were canceled.

This went on for several days so she stayed on. The day of the open house my ex went to work so he took the van. He was scheduled to be home before the party started. I dragged my poor MIL out in the snow to get the groceries we needed. This was definitely my bipolar in overdrive. It took us a couple of hours to and from a store only a couple of blocks away and she was not young. But she did it for me.

When we got home there were several messages of people saying they wouldn’t be there. My ex called and said he was stuck at the airport (he worked for a courier who picked up there).

So I had to admit to my MIL that she was right before we left saying that we shouldn’t go because no one would come anyway. These were the days where I hid my mental illness and I really wish I had told her why I got like that at times. She was a fine woman and I know she realized living with her son was not easy.

Finally, after a week late on her return trip, my MIL went home…by plane. And we had enough munchy food to last the month of January!

I haven’t had a holiday open house since; however, I have wanted to. It is just a lot of work, even for this caterer. I don’t have the energy for big events anymore – Give me a small dinner party any day!

Now, I can’t promise food, and there won’t be any eggnog; however, I invite you to come to my open house right here! Post a link to your blog and check out other posts as well. Let’s see if we can make this a true meet and greet!