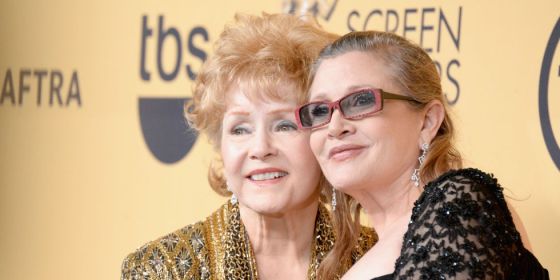 This started out to be a tribute to Carrie Fisher who was one of my favorite actresses and a role model in many ways.

I just read a report that Carrie Fisher’s Mom, Debbie Reynolds, was taken to hospital with a possible stroke the day after Carrie passed away from a heart attack. Her Twitter description, Debbie wrote “… My two children are the lights of my life…” My prayers are with her and her son, Todd Fisher, at this time.

As I was checking some information, I noticed the status for Debbie Reynolds changed to “died of a stroke, December 28, 2016.” So often one loved one will take ill when another passes. In an interview with Oprah, Debbie had said of the tough relationship she had with Carrie over the years, “I worry about what she will do after I am gone”.

Carrie Fisher was born in 1956 to Debbie Reynolds and Eddie Fisher. Her brother, Todd, was born in 1958. One year later Eddie Fisher would divorce Debbie to marry her best friend, Elizabeth Taylor. Both Eddie and Debbie were married three times, which made for a rocky family life.

I first heard of Carrie Fisher when she starred as Princess Leia in the original Star Wars movie. I say “heard of” because I did not see any of the Star Wars Movies until a bunch of friends got together to binge-watch the first three before the fourth (first?) came out.

I was more familiar with her mother, actually. You see my Dad had a bit of a crush on her. And one of the shining moments in his life was when my parents and grandfather went to Las Vegas and attended one of her shows. They were taken to a very nice table and my Dad was motioned to sit in the aisle seat. As a little aside, both Dad and “Pop” were mostly bald and almost looked like brothers – though my dad was definitely younger. Debbie Reynolds came out and part way through the show she started singing a song and walked up the aisle. Now I can’t remember the song but as she came back down the aisle she planted a kiss right on the top of my dad’s bald head. I so wish I had been there! That was a favorite story of his for the rest of his life!

Carrie was in several films that I did see – “Shampoo”, “Hannah and Her Sisters”, “When Harry Met Sally” and “Soapdish”. They all weren’t big roles, but those are what I remembered her for…until I finally got to see Star Wars! LOL!

However, the role I most relate to is Carrie’s struggle with bipolar. I saw her in various interviews where she spoke openly that her addiction to cocaine and prescription medication was to “dial down” the effects of mental illness. I could have become addicted to anxiety medication Xanax but it was because of people like Carrie, Margot Kidder, and Patty Duke speaking out that I realized what could happen. I am on a lot of medication for mood stabilizing, depression and pain, but I have it all monitored carefully and use natural remedies whenever possible.

I have read Carrie’s books “Postcards from the Edge” (and saw the movie) and “Wishful Drinking”, and plan to get her new one, “The Princess Diarist”.

So, I sit here with a heavy heart tonight, thinking that 2016 needs to just get out of here. We have lost too many people (celebrities and personal loss), there have been too many world tragedies and political turmoil.

We will miss you, Princess Leia. But your mother is where she wanted to be – by your side. Love to you both.