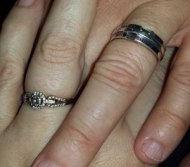 I am not one to cling to symbols or possessions. I have always maintained that it is the little things that get to my heart. But, when Hubby selected that ring over the one we were originally looking at, I fell deeply in love with him all over again.

When my Hubby and I first got engaged, we didn’t have a lot of money and I knew he wasn’t into shopping for rings. We picked a nice set for me and a basic gold band for him. My diamond was a nice ring that showed I was his but held nothing more than that.

By 2014 we had gone through a lot of things, both good and bad. Our relationship had been put to the test on many levels, with my health, family matters and just the fact that we were two very different people.

Things turned around that year and we decided we wanted to renew our vows in front of family and friends because we originally eloped. We set the date, I made invites (which never went out) and started working on the details. One thing that we decided is we would get new rings that really expressed our love for each other.

For me, we had found a single band with a few diamonds around the top. When we went to actually get it, Hubby kept looking at another ring – more expensive and very glittery. He asked to have me try it on. I could tell in his eyes that he truly wanted me to have it. It was flashier than I would have picked out, but I could just see his love reflecting off it.

For him, I picked the ring out on my own and had it customized. It was a simple band with horizontal “ridges” and two offset baguette diamonds to match the two in my new ring. I had the words “Always” and “Forever” engraved beside the diamonds.

The vow renewal ceremony never happened. My physical energy and mental anxiety got in the way and I had a major meltdown over photographs. Instead, we quietly went for a drive that day and found a spot to exchange vows and rings before each other and God.

Every time I see that glittery band on my finger I am in awe. But it isn’t the diamonds or the white gold that glitter for me – it is the love that they represent.