There’s A New Kid In Town

First of all, let me introduce you to Miley, the puppy formerly known as Cupcake. We spent a day calling her and referring to her as Cupcake and realized it just wasn’t going to work – so my Hubby has now made it her middle name.

Oh, and if “yall” are wondering if her name has anything to do with a certain singer with a little bit of the wild child in her, you would be correct. Miley Cyrus was born Destiny Hope because she had a serious heart condition and her parents wanted her to have the best chances to survive. Even as an infant she always had a smile on her face so she was nicknamed “Smiley” which got shortened to “Miley”. She went on to change her name legally and the rest, they say, is history. Our Miley is bouncy and happy, and a little wild at times so the name fits!

Miley is very timid considering her start in life. As I mentioned before, she and her five siblings were found in a garbage bag by the side of the road just outside of Puerto Vallarta, Mexico. It was night time and a volunteer from the animal shelter was on his way home. He saw the bag move and got out to investigate. There he found six little pups, days or weeks old. He took them to the shelter the next day and they remained there until they were ready for adoption. All six now are adopted in the Western Washington State and Greater Vancouver BC area. 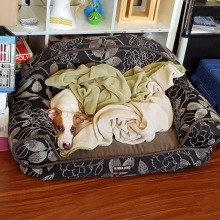 Being both shy and cold (leaving hot Mexico for fall temperatures here, she wasn’t too fussy about going to the dog park. We went on Saturday after we had picked her up Friday night. All our friends were dying to meet her and while at first, she clung to Hubby and me, she did start to play with some of the smaller dogs…and Eh’sia, a one-year-old Pitbull who thinks she is a little dog!

We have been back and forth to the park all week and she is getting much better. She is a natural at playing fetch, adding her own little twist of taking the ball back to “her” bench, whether it was thrown from there or not. She knows my walker as a safe place so hides underneath it if things get too overwhelming. And just like Violet, everyone loves her.

One of the funniest things about little Miley is the way that she moves. She doesn’t walk or run. Instead, she hops or sprints. This is probably due to the fact that we have figured out she is not a lab cross (something I doubted even from pictures before we met her). We are pretty sure that she is a Jack Russell Terrier and Whippet cross. Both breeds are

big in Mexico and I even found a crossbreed.

The healing effect of taking Miley to the park is two-fold. First, she can drive you crazy in the house with all her energy. She has chewed up an old bed of Violet’s that we were making Miley’s, torn up things all over the balcony and tries (without success yet) to play with Monkey, the cat. She even scratched a hole in the wall in “her” room while we were out. Taking her to the park helps to wear off a little of that energy and train her on potty rules.

The second healing effect is that we are back in the park with all our friends. It is not like they weren’t our friends when we didn’t have a dog, but now things feel right again. Even when I am just in the park alone with Miley, playing ball or hanging out on our bench, it is a new experience, very different from when I was there with Violet – not better, just different!