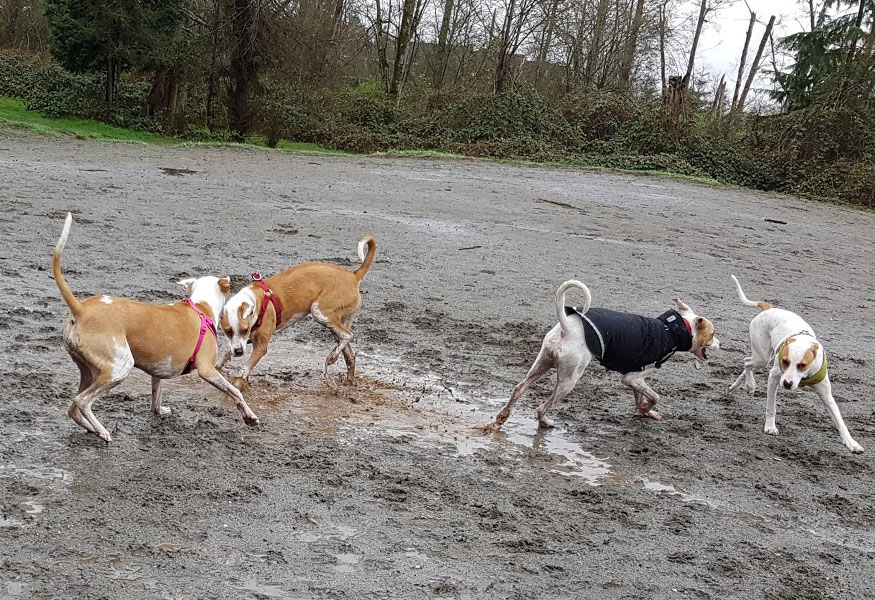 Every time I think this series is over, something else happens to earn another chapter!

I have talked about Miley, the cute little Mexican rescue dog we adopted last September. She was found by the side of the road in a plastic garbage bag with her 5 siblings by a volunteer from the Puerto Vallarta SPCA shelter. The six were nursed to health and put up for adoption when they were four months. By the time we got Miley, she was about 5 months (by their best calculation).

We found out that three more of the puppies were adopted out in the Vancouver Lower Mainland (where we live). The other two went to Bellingham Washington and Victoria on Vancouver Island.

We have been in touch with one family, who have Miley’s brother Tex since we met in Seattle where we had to pick up the puppies. I had left a note on the Facebook page of the people with Miley’s sister, Luna, but didn’t hear anything until last week. They had been in touch with the fourth family.

At last, all the pieces were in place. We all exchanged stories and pictures with the idea of getting together. We thought the end of May would be good because it would be their (given) birthday; however, one person would be out of town. So, we figured it would be in early June.

Then, two of us decided to informally meet this past Sunday and it turned out everyone was available.

I had a fall on Saturday and was very sore, especially my bad leg. I didn’t think I would be able to go but everyone agreed to meet in a place that was close enough for me so I could come, even though two families would have to come further. For people I barely knew or didn’t know, this was a real spirit lifter. It made me want to be there no matter what.

We arrived second and Miley and her sister, Luna, were a bit standoffish. As the boys arrived it didn’t seem like any of them seemed familiar. Though they are all rather shy at first so this response didn’t surprise anyone. Miley was the worst one, hiding behind me for quite awhile.

All of a sudden it was like lightbulbs went off in their heads and they were running around playing and chasing…even Miley! They were hilarious. It seemed like the boys and the girls paired up, though often they would all huddle up. The park was muddy and soon the dogs were covered in it. I felt bad for those that travelled a distance and would be going home smelling wet dog.

For the hour or so that we were together, I felt like I had made 5 new friends and all my pain and fatigue seemed to melt away. Even more than just in our own dog park, I felt alive. This is not taking anything away from our park and the friends (canine and human) we have met there. But this was a family reunion we all got to witness and it such a good feeling to see these puppies happy.

There was no separation anxiety when we parted ways. They had to get one last wrestling match in while in the parking lot but then were fine to get into their vehicles. Well, all but Miley, who went back to the park gate and wouldn’t move no matter how hard Hubby tugged on the leash. Everyone laughed thinking she loved the park, but we knew it was more she didn’t want to go into the van. I wish I had a picture of Hubby carrying her to the van, trying not to get wet and muddy in the process!

I consider this good medicine and even self-care because no matter how rough I was feeling, the thought of missing this reunion felt worse. Hubby explained when they were planning the meet that I suffer from chronic pain so everyone asked how I was feeling when I got there and didn’t question the walker (except for how I would get across the wet loose gravel and mud). I just sat and everyone ended up coming under cover as well to stay out of the way of the oncoming dogs!

Miley helps me in so many ways with the most obvious being just getting out of the house 2 – 3 times a day to take her for a walk or to the park. The funny way she runs around with a favourite toy (or a park stick) in her mouth is infectious and lifts you up just watching her. She has started watching out the balcony door and lets me know when any of her friends are there. This means that my friends are there too. And many of the people in the park have their own struggles. We talk and help each other as a community or family.

We are getting the siblings together for a belated first birthday in June. We may be going to a park further away for us but by then the weather is pretty warm and travelling is easier for me. The date hasn’t been confirmed yet; however, it is already improving my state of mind just to see these dogs together!