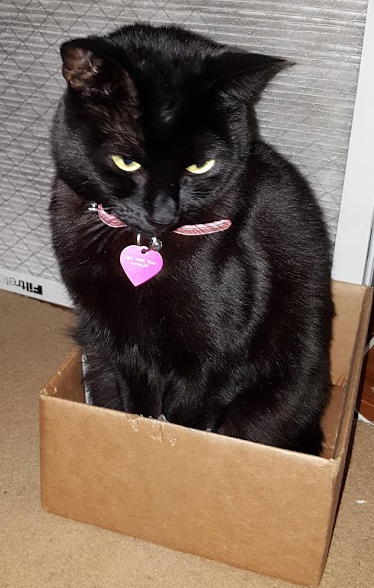 I have some posts I need to finish and publish here, but this one is just too sweet to pass up. And I know that many of you love when I talk about how my pets and/or the dog park make my chronic life more liveable. This is no exception to that.

Monkey is a cat first and foremost. She has a few dog tendencies like begging for treats and going for walks (dog on a leash, cat following). But if you tell her this she will flatly deny it. After all, she is a cat.

Our previous dog, Violet was my unofficial service dog. When I would cry out in pain or just cry, she would come and put her head on my knee. If I slept in my recliner because of pain or coughing, she would curl up on the couch or her bed and stay with me. She had a lot of her own pain issues and we were good for each other.

When we lost our precious Violet last fall, I was devastated in more ways than normal. She got me outside and more importantly to the dog park where I met some fantastic friends. And even when she was so sick at the end, she always greeted her friends, human and canine, with true love.

We got Miley at 5 months old at the end of October. She was so scared of everything and everyone that we gave her extra cuddles and encouragement. She has really come a long way in the last 8 months to the point where she doesn’t want to leave the park half the time because she is busy playing.

Even though she was born several months before we lost Violet, we are positive that there are qualities of our girly girl mixed into Miley’s DNA. Miley comes to comfort me when I am sick, sad, etc. She will just come up and shower us with kisses and toddle off to whatever she was doing. Miley has taken up the role of my service dog quite naturally.

One of Monkey’s nicknames is “Box Kitty” and she comes by it very naturally. Most cats

love to get inside things but Monkey has made it into an X-games sport LOL! She has to try out any box that comes into the house even if it is too small. We couldn’t find her one time (of many) and we knew the general area but couldn’t quite figure it out. She had been jumping up onto an antique secretary desk and from there to the top of a bookshelf. But we couldn’t see her… then we figured it out. On top of the bookshelf was a black fabric cube box that just had some empty bags in it and no particular place to be. We pulled it down and sure enough there she was.

Another Monkey trait is, being a black cat, she prefers to blend into her environment, meaning she will seek out anything black or even dark blue/brown. The black cube was on the floor as I was going to put it away in the morning but no such luck. It has become Monkey’s night-time bed of choice. She even hides from Miley in there when she wants to be left alone in the daytime. So, of course, the black cube has remained on the floor albeit with a white pillow sham so we can tell she is in there. See white, no cat. See black, well you can do the math!

I still haven’t gotten to the service cat part but be patient (a quality Monkey does not have, especially when it comes to food and treats).

There are various cardboard boxes around the house, with one being at the entrance to the office and across from the kitchen entry. After hubby goes to bed, Monkey has been taking to curling up there while I work on the computer. I figured it was just so she could keep an eye on when I go to the kitchen (to get her treats of course), but I noticed a pattern. She doesn’t follow me to the kitchen every time and she often is asleep there. But after I either go to bed or (if in pain or coughing) my recliner, she toddles off to her cube bed for the night.

Last night I was coughing up a storm and in pain with a possible kidney stone/infection. I decided to settle into my recliner so I could sleep in a position good for both conditions. I hadn’t even reclined when Monkey came and wanted to cuddle (a rare occasion unless the chance for food is involved). And she stayed there for at least 10 minutes until I just couldn’t cuddle anymore. I then went off to sleep (about 1:30 am).

We have a pet couch in the living room. It was originally bought for Violet but a tiny kitten (who would lay right in the middle) kept taking it over. After Violet left us the bed became Monkey’s legitimately… until Miley stole it back. Payback time for the canines!

At around 5 am I woke up and decided to go to the bedroom as medicine seemed to settle everything down. I looked over at the pet couch. There was Monkey, curled up on it fast asleep. She had stayed with me in the living room. I was touched almost to tears. If the coughing and wincing hadn’t scared her away, she had obviously been worried about me and wanted to keep me company.

Well at least until she started begging for treats even before breakfast.

I know she would never admit it (she is a cat), but I think some of Violet’s tendencies have rubbed off on both of our fur-kids.

I love my black furball!