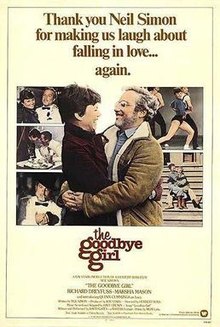 I have been way behind in my postings the past week or so and I want to catch up. I may be late but I always finish my commitments. In future posts, I will talk about what went on while I was away from the blogosphere. Now, let’s get to it!

While I was trying to decide on my last entry for the three-day lyric challenge, I found out that another favorite of mine had passed away – Neil Simon.

For those who don’t know who he is, Neil Simon is famous for Broadway shows like The Odd Couple (which became a famous movie and many, many TV series on the theme), Barefoot in the Park, Biloxi Blues, and Brighton Beach Memoirs.

The Goodbye Girl was a screenplay he wrote for the 1977 movie starring his then-wife, Marsha Mason, and Richard Dreyfus. Like all of Simons’ work, it was a feel-good story that appealed to everyone. It became the first Romantic Comedy to make $100 million gross at the box-office.

The theme song “Goodbye Girl” was written, produced and performed by Bread Frontman David Gates for the movie.  The song reached #15 on the Billboard Hot 100 and #4 on the Adult Contemporary Charts.

It is a feel-good song that can stay in your head for a very long time. Hope you like it.

RIP Neil Simon, you may be gone but you will live on forever through your productions.

Doesn’t mean forever
Let me tell you goodbye
Doesn’t mean we’ll never be together again
If you wake up and I’m not there,
I won’t be long away
‘Cause the things you do, my goodbye girl,

will bring me back to you

Doesn’t mean forever
Let me tell you goodbye
Doesn’t mean we’ll never be together again
Though we may be so far apart
You still will have my heart
So forget your past, my goodbye girl
‘Cause now you’re home at last