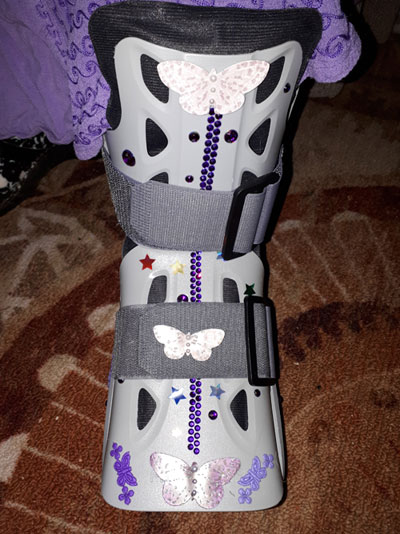 Wow, it has been a long time since I have written anything. It is partially due to the fact I have been dealing with a lot of pain and partially because I had a case of writer’s block. So I will endeavour to catch up on all that you’ve missed.

Let’s get to the title this post. Why do I only have one boot? Well, the picture I think says it all. Last Wednesday I fell out of bed once again and could feel all of my weight land right on my left foot. I felt something move and said to my hubby (who was coming around to my side of the bed to help me up) “I think I broke my ankle.”

He checked it and I could move it and my toes; however, as the days progressed the foot was swelling, bruising, and hurting more and more. By Friday afternoon I could not put any weight on it. Hubby called on his break and I asked him if he could please come home as I was (finally) ready to go see about it.

We arrived at the ER around 7 pm and ended up being guided to another waiting area at 11 pm. It was after midnight when we were lead to a stretcher which was heaven for me. Unfortunately, I was only there long enough for the nurse and doctor to examine me and send me for x-rays then put me back in the second waiting area.

About 4 am the doctor came over and told me that I had broken my foot. It was a clean break of the 5th Metatarsal bone in my left foot. This is the long bone that runs from the toe to the top front of the ankle. The 5th bone is attached to the little toe.

By 5 am I had been fitted for an “Air Cast” boot, given some instructions and (finally) sent on my way.

I was in full anxiety mode just being at the hospital. When we finally went through triage I knew we were in for a long night. When you have a chronic illness and have to come for various reasons, you can get lumped in with the “frequent flyers” – a group of people who are in the ER for silly reasons but are really looking for drugs.

When I am in absolute unmanageable pain, I will take something called Emtec. It is the same as a Tylenol 3 (with Codeine) except it does not have caffeine which gives me migraines. I have not touched opioids for many years. I wouldn’t even allow them to give me morphine after surgery a few years ago. But I still was labelled as a user. This is one of the things I am passionate about advocating for Chronic Illness.

Anyway, it was very obvious that I was put down at the bottom of the triage list and no one was really going out of their way to look after me. When I went for the x-rays the technician asked me to get onto the table and I struggled a bit trying not to put weight on my foot. After the x-rays, she told me not to move until she could help me and then not to put weight on the foot. I think I realized then that something was definitely wrong with it.

When the doctor came to tell me he also was a little more compassionate. He answered my questions and then told me they would try and get the boot on as soon as possible so I could leave. The nurses were more friendly as well, finding me a recliner chair to wait in for the boot.

But finally, I was fitted with my boot and on my way. Hubby was back to pick me up and we headed for home. I was surprised to see that it was light outside – as it was 10 hours before when we arrived.

Hubby was able to sleep right away but I wasn’t. I got up and made a cup of tea which then helped me sleep for a few hours until my Tylenol wore off and I needed to take some more.

In the end, I have to say that I was glad I went to the hospital and got it checked out. If I hadn’t the bone may not have healed properly and may have become my next chronic pain.

Oh, yes, part of being Lydia means I can’t help personalizing everything. I had to add purple bling and butterflies to this otherwise boring boot. And enjoy a little blast from the past with Nancy Sinatra’s “These Boots Are Made for Walking.”

8 Replies to “This Boot Is Made for Walking”